Tiger Laughs When You Push

Since my middle grade novel sold in 2014, I’ve gotten to know many of my fellow debut authors. Within that group is a small cadre of poets who also write fiction for children. Some of us have had long careers publishing in literary journals and teaching creative writing before we made the cross-over to a big-press contract with a middle grade or YA novel.

One of these poets is Ruth Lehrer. Ruth’s fiction and poetry is widely published in the world of small presses. Her young adult novel, BEING FISHKILL, debuts from Candlewick in 2017. You can read about it here. 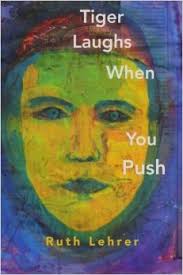 Find it at Amazon.

Today, I’d like to focus on Ruth’s poetry. She’s celebrating the new year with the publication of her first chapbook, TIGER LAUGHS WHEN YOU PUSH, from Headmistress Press.

Let’s take a look at a poem first, then Ruth will join us to talk about it. In my last post, we were looking at how to create tension between the characters in a poem. The small space of a poem doesn’t give the poet much room for backstory, so tension must be communicate through small, often symbolic, details. Pay attention to all of the layers that Ruth creates between the two people in her poem, “Détente.”

A military man
forty years
in the people’s liberation
army, now he grows
a garden in a westchester suburb.
Fight the chemo and
the foreign food
he speaks only chinese
and I only english.
We meet in gestural middle
to discuss his eggplants
qie zi — my one chinese word.
Tempting fate
he plants my two
new england garlics
and the next year
he has eight.

I asked Ruth to give us a little bit of background on this poem.

Ruth Lehrer is a writer and sign language interpreter living in western Massachusetts. Her fiction and poetry have been published in journals such as Jubilat, DecomP, and Trivia: Voices of Feminism. She is the author of the poetry chapbook, TIGER LAUGHS WHEN YOU PUSH, published by Headmistress Press. Her novel, BEING FISHKILL, will be published in 2017. She can be found at ruthlehrer.com

Find out more about TIGER LAUGHS WHEN YOU PUSH at Goodreads.

2 responses to “Tiger Laughs When You Push”