Laura’s Bookshelf: THE DISTANCE FROM A TO Z

Hey, everyone. I’m migrating my occasional series, “Laura’s Bookshelf,” from Author Amok to the new digs. If you’ve missed a past episode, you’ll find a full list of what’s been on my bookshelf at the end of this post.

One of the best parts about being a debut novelist has been connecting with other middle grade and YA authors in the class of 2016.

Over the holiday break, I read THE DISTANCE FROM A TO Z by Natalie Blitt. This French (and baseball) infused summer romance had me ignoring the cold, dreary weather. Instead, I dreamed about walking on the sunny, cobbled streets of old Montreal. Preferably with a cute boyfriend by my side. (Hey — I’m allowed. My cute HS boyfriend is now my cute husband of nearly 25 years). 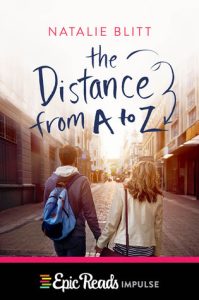 Find it on Amazon.

Abby is spending the summer on a college campus, where she is taking an intensive French course, designed to bring her from awkward to fluent in the language of love. Being a Francophile is how Abby has defined and identified herself, a way of separating herself from her family’s overbearing obsession with baseball. There’s only one other high schooler in her class, and he’s super cute, but those baseball t-shirts he’s always wearing are kind of worrying to Abby.

What follows is an adorable “will they or won’t they get together” story. With a lot of coffee. And one of my favorite BFF’s ever, Abby’s summer roommate, Alice.

This contemporary YA launched on January 12. Congratulations on your debut, Natalie! Here is the blurb from Goodreads:

This full-length novel by debut author Natalie Blitt is a pitch-perfect blend of Stephanie Perkins and Miranda Kenneally that proves the age-old adage: opposites attract.

Seventeen-year old Abby has only one goal for her summer: to make sure she is fluent in French—well, that, and to get as far away from baseball and her Cubs-obsessed family as possible. A summer of culture and language, with no sports in sight.

That turns out to be impossible, though, because her French partner is the exact kind of boy she was hoping to avoid. Eight weeks. 120 hours of class. 80 hours of conversation practice with someone who seems to exclusively wear baseball caps and jerseys.

But Zeke in French is a different person than Zeke in English. And Abby can’t help but fall for him, hard. As Abby begins to suspect that Zeke is hiding something, she has to decide if bridging the gap between the distance between who she is and who he is, is worth the risk.

THE DISTANCE FROM A TO Z is appropriate for older middle school and up. (There is some very mild underage drinking).

What will readers learn about?

Those who are new to the Bookshelf, I always pair a poem with the books I feature. And I found THE PERFECT poem for Abby and Zeke. If you read May Swenson’s “Analysis of Baseball” as a metaphor for relationships, the push and pull are exactly what’s happening in this story of Summer Lovin’.

Analysis of Baseball
by May Swenson

THE REMARKABLE JOURNEY OF CHARLIE PRICE, by Jen Maschari (12/3/15)

Tagged: "Analysis of Baseball", Natalie Blitt, The Distance from A to Z