This “Save Our School” button is actually a promotional postcard for my book. Can you imagine Ms. Hill’s class wearing buttons like these to protest the closing of Emerson Elementary?

It was one of those serendipitous moments.

My friend, poet and educator J.C. Elkin. was asking about my debut children’s novel, THE LAST FIFTH GRADE OF EMERSON ELEMENTARY.

This, fellow writers, is a question that strikes fear into the hearts of many novelists. As soon as these words fall from someone’s lips (especially if that someone is an editor, agent, or book blogger), you have exactly 2-3 sentences to explain the book that you have spent the last X amount of years working on. In a nutshell.

I’d been working my 2-3 sentences, what’s known as “the elevator pitch.” I was prepared.

“Jane,” I said. “It’s about a group of fifth grade poets whose school is being closed and they stage a protest to save it.”

Jane didn’t reply with, “That sounds interesting.” Or “Great topic!” Or even, “And it’s a novel in verse?” Instead, she said. “That happened to me.”

What? Schools — both public and parochial — being shut down is a huge issue in my home state of Maryland right now. [You can read about parents protesting the closing of North Carroll HS at the WBAL website.] Communities are, understandably, invested in their schools. When a Board of Education slates a school for closing, it has a negative impact on the students, families, and the surrounding community.

But that’s happening now. Jane was talking about many years ago, when she was in high school.

“What’s more,” she continued. “We won. We saved our school. And it’s still around today.”

I’ll let Jane, who is a past contributor to my Author Amok blog, tell us the details.

In the winter of 1974, my school nearly closed and I found myself fundraising for a place I thought I hated. It was freshman year at a parochial school I’ll call Saint A’s, which my mother forced me to attend after student-teaching a year at the public school my brothers attended. She transferred me in July when it was too late to say goodbye to my junior high friends, the best friends I’d ever had at the school where I’d been happiest.

Saint A’s was wrong for me on every level. It drew scholars from a thirty-five mile radius in a town I’d never been to. I was a so-so student, gifted with words and inept with numbers. Saint A’s had the worst music program in the state, officially, based on a state-wide competition. I was a talented singer, and the public school music program was the best in the state. Then again, they also had a slew of social problems my mother had seen first-hand: drugs, violence, bomb threats . . . She had seen girls cat-fighting over the fathers of their babies and seen my eldest brother beaten to a bloody pulp by a gang in the woods where he ran cross-country. She saw only a den of iniquity and a naïve girl she needed to shelter. Academics had little to do with her decision, though my second brother, the smart one in the family, was allowed to transfer with me.

Of course, Saint A’s had problems, too. Over its thirteen year history, it had developed a reputation for academic excellence amid mismanagement. Students wore any of four different uniforms dating back to the school’s inception, and the place was drowning in debt because the nuns who founded the school were now outnumbered by lay teachers. The football team, however, after two years without a win, had just won the state championship, and the once glorious debate team was rising from the ashes of dormancy. Nevertheless, when the administrators called a meeting to inform us of the financial crisis, they had already made up their minds to close.

The meeting was held in the gym on a school night, standing-room-only amid a crescendo of nervous chatter. The new principal, a stout nun, sat on the stage as rigid as a deposed monarch on a folding throne. Her diminutive administrator, an affable little priest who’d bungled the budget from day-one, was hunched by her side, the Board lined up at a distance.

After a brief prayer, they cut to the chase. Unfortunately and unavoidably, that year’s graduating class would be the last. Everyone froze in stunned silence. Then a look of dismay washed over their faces, infecting me. After only five months, I suddenly didn’t want to leave. I should have been ecstatic; I was finally going to get what I wanted. But leaving Saint A’s would mean leaving new friends, the speech team, the band’s baton squad, honors classes where I was excelling, and even the tiny chorus where I discovered I liked small ensembles better than large ones.

So there we were, four hundred students trying to wrap our heads around this new reality, and you could hear the hum of the lights.

Then the questions began. How did this happen? How much do we owe? A junior, raising his fist in defiance, yelled Hell no, we won’t go, and I joined in the anti-war chant, marveling at how original he was. The accountant appealed for order and someone from the bleachers called out, “How much do we need to tide us over? Maybe we could raise the money. ”

Instant silence. Why not? A car wash, a raffle, a spaghetti dinner? The usual ideas were tossed around and rejected like underinflated volleyballs. Then some rich kid suggested, “What if each family gave a dollar a day?” A mighty groan went up from the blue collar sector. Three hundred sixty-five dollars was about a year’s tuition in 1974. Today it is over twelve thousand.

Another guy jumped up on the bleachers, patting the air to hush us. “What if we had a pledge drive? We could call it the 365 Club!”

The segue from idea to action was immediate. Desks were dragged in, and within minutes the gymnasium was divided into communities with committees formed and names, phone numbers and addresses recorded. The accountant targeted a figure, and a Saturday was set for the student body to go door-to-door with coffee cans. Our sales pitch: no donation too small but a dollar a day would be great.

A plywood thermometer was posted on the lawn, and we reached our immediate goal by spring. Only one student received a pledge of $365 from a stranger, but it was a real eye-opener to see who gave and who didn’t. My 7th grade English teacher, who lived in a beautiful seaside cottage, didn’t believe in supporting private education –not even a dollar’s worth –but a shabbily dressed maid from the nearby resort emptied her pockets for me.

Smaller fundraisers followed, but our grassroots organization was the magic bandage. Three years later, with the school’s music program officially defunct, I won the state championship for debate and was accepted to a prestigious liberal arts college.

I often ponder how my life would have been different if Saint A’s had closed. I would have gone on to study music, but I wouldn’t have developed academically. I definitely would not have met my debate partner, who caused me to meet my husband, and that meant I wouldn’t have lived in Europe where I became bilingual and continued to hone my vocal skills, which ultimately led to a career teaching language and music.

I went on to sing professionally for thirteen years at, ironically, the country’s largest Catholic church –the Basilica of the National Shrine of the Immaculate Conception in Washington, D.C. There, I sang televised soli, made seven recordings, travel to Rome twice, and even sang for the Pope in a private vespers service. 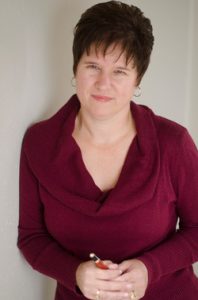 J.C. Elkin is an optimist, linguist and singer whose writings draw heavily on spirituality, feminism, and childhood. Her work teaching English as a Second Language inspired her chapbook World Class (Apprentice House, 2014). Other poetry and prose appear in such journals as Kestrel, Kansas City Voices, Delmarva Review, and Angle.
Visit Jane’s webpage at the Broadneck Writers Workshop .

6 responses to “Save Our School”